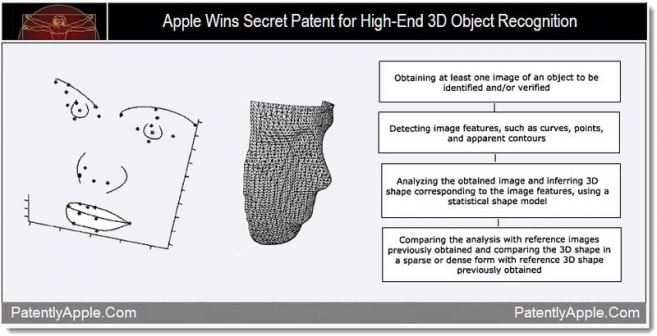 The facial recognition technology is not new to those who have been following the development of smartphones. These technologies are improving everyday. People will rely more on these technologies as more advanced solutions are introduced to the market. A recently discovered Apple patent by PatentlyApple suggests that the company may be interested in developing advanced 3D object recognition technologies. Apple’s patent covers a method of recognizing objects and faces based on  a 3D representation of curves, points, and other elements.

The invention consists of a statistical model of the shape variations in a class of objects relating the two-dimensional (2D) projection in images to the three-dimensional (3D) shape of the object and the use of the 3D shape information for identification or verification of the object. … In the method the object may be one or several of: a human face, a human body, inner organ(s) of a human body, blood vessel, animal, inner organs of an animal, a tumor, manufactured product(s) from an industrial process, a vehicle, an aircraft, a ship, military object(s).

The patent document states that 3D models can be pulled from 2D images. These models can be used to identify objects and verify faces. As PatentlyApple explains, the recognition technology discussed in this patent is developed by Jan Eric Solem of Polar Rose (a company Apple acquired in 2010). Polar Rose technology is already being used in facial recognition and detection features in the iOS platform.

This technology is expected to be first used for medical and military purposes. It does have the potential to go beyond current facial recognition technologies used in smartphones. At this point, it is not clear when Apple will get more serious about the 3D facial recognition business.

Trending iPhone, iPad apps:
*Our articles may contain aff links. As an Amazon Associate we earn from qualifying purchases. Please read our disclaimer on how we fund this site.

The iPhone 4S may not be a drastic upgrade over its predecessor in terms of its design. But it is...