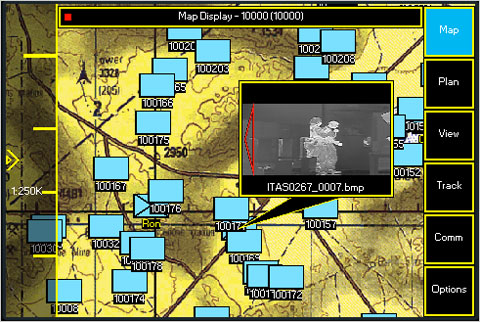 The iPhone is known for being a lot of things. It’s a smart-phone that can be turned into a GPS, used as a portable camcorder, and can even help you find a job. But that’s not all it can do. It can actually be used to help the military fight counterinsurgency by keeping track of friends and enemies (using One Force Tracker application). One has to wonder what’s next? Maybe the military will next use the iPhone to control those drones ?

The app apparently works like any other app on iPhone. Raytheon has probably saved a lot of time and money by taking advantage of the platform Apple has already put in place. As you can see in the above image, One Force Tracker allows the men and women in the military to find out about their positions and communicate each other using secure channels.

Wired.com had this to publish from Raytheon representatives:

I’d be the first one to tell you that there is something fishy about this story. The iPhone is a consumer product and as much as one would love to believe that it can be used during battle without any issues, that’s just not the case. The iPhone does not have the capability to handle multiple programs easily. It’s also not made for the tough conditions that fighters may face during battle unless Apple plans to develop rugged iPhones for the military.

The military doesn’t use consumer products to achieve tasks on the battlefield. That’s just not going to happen. It always has access to the latest gadgets (sometimes secret ones), so adopting the iPhone as a communication tool seems suspicious to say the least. Not that I believe in conspiracy theories, but why would the military use a device that could be susceptible to hack attacks? I guess that’s not an issue when drones can be hacked using $26 software. Maybe we should just use the iPhone for social gaming and things of that nature.