It is no secret that Apple does not release a new iPhone every few months. In fact, when the company upgraded the iPad after 6 months, Apple fans got very angry. Nevertheless, the company may be leaving money on the table by releasing a new iPhone just once a year. At least that is what Sony Mobile chief and president of NW Europe, Pierre Perron has told the Inquierer:

There is a cycle in the chipset market which can give us the opportunity to launch a new product more often than once a year …This market is going very fast. Because mobile consumers are more demanding when it comes to entertainment experience, [they] want to access music, game experiences, faster [and] easier, in a more integrated way.

There is no question that Apple could release multiple iPhones a year and still sell millions of units like it always does. But there are plenty of challenges along the way. Besides, Apple pays a lot of attention to user experience when building its phones and tablets. Apple’s strategy has been working well for the most part. There is no reason for the company to take lessons on how to change that. 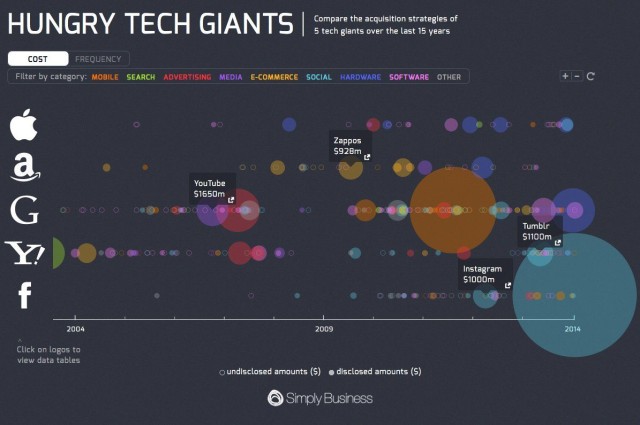 Speaking of Apple and its competitors, these large companies have been acquiring many smaller firms for technology, and patents, and talent. Facebook is the latest company to complete a big acquisition. Simply Business has put together an infographic that shows how big tech companies have spent their money on acquisitions over the years. Not surprisingly, Apple has not burned a ton of cash on the companies it has acquired (in comparison to its rivals).
[via]