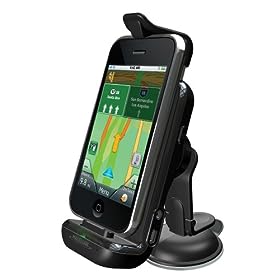 It would have been ridiculous for anyone to expect GPS companies to offer their mobile applications for free on iPhone or other platforms. In fact, you’d be lucky to get your hands on a premium GPS app for less than $50. TomTom, Navigon, and Magellan all have GPS apps that cost in the $70-$100 range. Add the additional GPS kit you can get from TomTom and Magellan, and you are looking at a $200 bill for the privilege of using a top GPS app on your phone.

TomTom has recently announced a new special for the holiday season, offering the U.S. version of its GPS app for a more affordable price (less than $50). That’s $50 more than what you’d have to pay for Google Maps Navigation, that is if it was available for use on iPhone. For a while, GPS companies such as TomTom looked destined to dominate the mobile GPS market, but Google’s new (and free) GPS app has put a serious dent in that plan. The trouble is Apple and Google can’t get along, and that’ll remain the case for the near future. Nevertheless, is it really worth investing in a pricey GPS app when you may get Google’s innovative GPS app on iPhone in the future?

I am a bit pessimistic of Apple allowing Google to have all the glory with its iPhone app. I am sure Google is working on an edition of its navigation software that could pass Apple’s approval criteria. Regardless, Google has given a lot of folks a few good reasons to pick up an Android device. If you are going to pay close to $200 to transform your iPhone into a GPS, you may as well pick up a standalone GPS and save yourself some money as well.

Google Maps Navigation may not be available for iPhone users at this point. But TomTom and other GPS companies need to step up their game if they want to justify people paying a decent amount of money for their applications. I am sure they are going to find it difficult to compete with “free,” but it’d be nice to see them try, at the very least.

Google To Raise The Stakes with Nexus One

Remember how Steve Jobs decided to force a shift in Apple's board of directors and treat Google as a real...