Google can make a killer GPS application as well. One has to feel bad for GPS companies that are taking a beating from their mobile counterparts. In a move that has shaken the mobile and GPS industries, Google has announced that Android phone owners will get Google Maps Navigation (a fancy name for a GPS) with a host of premium navigation features. Unlike TomTom GPS for iPhone or other top GPS apps, you don’t need to pay Google to take advantage of this feature. Yet, you get a host of features that are available on those fancy apps.

The app allows you to search for your favorite POI on your Android phone fast. It also supports Voice Search, which could be useful if you want to run a hands free system. Traffic and satellite views are both useful in helping you find you way around. Did I say the app is offered for free to Android phone owners? 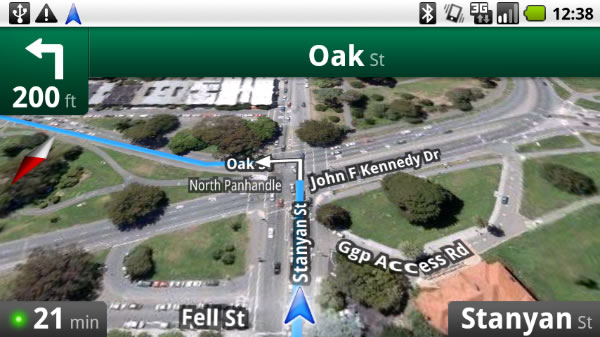 Google Maps Navigation is currently being offered on Android, but Google hasn’t closed the door on bringing the app to iPhone. Instead of bickering and complaining a bit more about how unfair Apple has been, Google has decided to introduce a must have service to build a case for having more of its services offered on iPhone. Apple has a difficult decision to make. On the one hand, iPhone owners can really use such a killer application. On the other hand, Apple has burned some bridges with Google, and while it should not beg for Google’s service, these two companies should find an amicable way to put the Google Voice issue behind them.

Google’s strategy is clear and something that Apple needs to still keep an eye on. Google is planning utter world domination when it comes to mobile devices, and these free services are tools toward achieving that. That won’t sit well for a somewhat controlling company such as Apple. At the end of the day, we may see this killer navigation app on iPhone. The two companies are still partners and will continue to work together in areas they have in common. But will Apple make any concessions? That’s a whole other story.

Your turn: should Apple allow Google Maps Navigation on iPhone?