Amazon has been making tablets for a while now. The company has a powerful ecosystem to push its highly modified Android tablets. The new Kindle Fire HDX tablets do have a lot going for them. But they are in no shape or form iPad killers. That’s not what Amazon wants you to believe though. The company has yet another ad that seems to suggest the Kindle Fire HDX offers buyers more bang for buck:

It is true that the new Kindles do have a great display and faster processor. They’d be a more formidable challenge to iPad if they ran the latest version of Android. Fire OS simply limits users in many ways. For what it’s worth, Amazon is still offering deals on Kindles for Cyber Monday, so it is at least trying to compete. 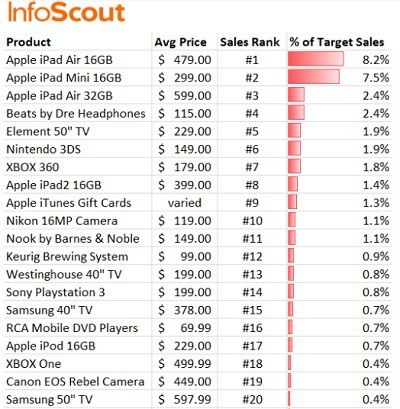 Speaking of major shopping days, it seems Apple’s iPad has been the biggest winner on Black Friday. According to InfoScout‘s survey, many Black Friday shoppers were interested in getting their hands on an iPad Air or iPad Mini. The data is based on an interview with 3000 Black Friday shoppers at Target. As you can see in the above visual, iPads simply dominated tablet sales. Let’s not forget that people are still not done shopping.