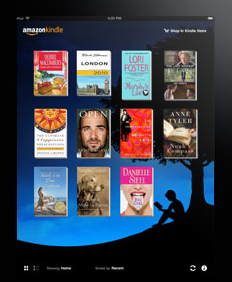 Those of you who have had a chance to check iPad.com realize how strange it is for Apple to not own that domain. Most large companies acquire branded domain names before they even announce their upcoming products. Apple seems to be getting better in this game as it has taken possession of iPhone4.com and WhiteiPhone.com domain names. Some of these domains have cost Apple a decent amount of money (e.g. iCloud.com). The company keeps registering new domains though.

While Apple is getting more serious about protecting its brand names online, it is also bracing for a tough challenge from Amazon in the tablet market. Motorola, Acer, Asus, Samsung, and LG have all tried and failed to come up with an iPad killer. A report by WSJ suggests that Amazon is preparing to bring its own tablets to the market by October 2011.

Amazon’s first tablet will have a 9 inch screen and will be designed to take full advantage of the company’s full array of services. Most experts believe this tablet will be a budget model to compete with NOOK Color. As we reported earlier, Amazon does intend to bring a quad core tablet to the market some time in the future. It does seem Amazon intends to target all segments of the tablet market to give itself a better chance of staying competitive with Apple.

Apple, for its part, is readying iPad 3 to continue its domination in the tablet market. Foxconn will have Apple’s business for the time being. There were speculations that more manufacturers could be brought on board to handle iPad 3 orders. As Digitimes reports, there has been a change of plan:

However, Foxconn has exerted its efforts to protect its orders and apparently has persuaded Apple to not shift some of its iPad orders to other contractors for the moment, the sources added.

Regardless of what Amazon comes up with, it will still be difficult for it to top iPad’s numbers. But if there is one company that could make a worthy iPad challenger, it is Amazon.

Many of us have already upgraded our phones to the latest generation iPhone (running on Verizon or AT&T). Both networks...