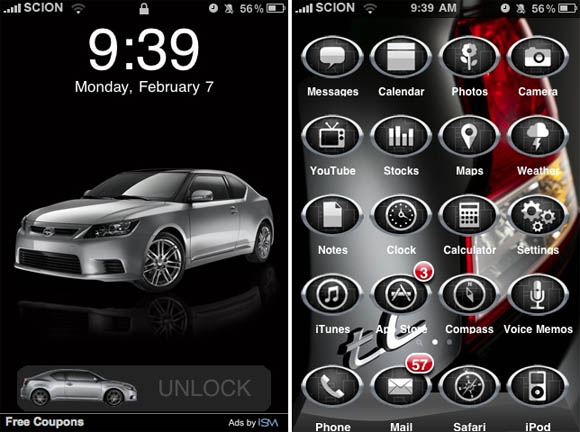 It is no secret that Apple does not appreciate jailbreakers or the role they may have played in expanding the iOS platform. In fact, the company goes out of its way to stop jailbreakers from getting around the restrictions it has set on its products. In another shot against jailbreakers, it seems Apple has pressured Toyota and its ad partner to pull their iOS-based theme and ad campaign from ModMyi.com.

I received a call from our contact at Velti this evening as well as an email asking me to please take the theme out of Cydia. On the phone, he explained Apple had contacted Toyota and requested they remove the theme and stop the advertising campaign… The reason Velti listed for the removal request of the theme emailed through our dev portal was “Toyota’s making us take it down…” Toyota had agreed to do so to “maintain their good relationship with Apple,

writes founder Kyle Matthews. The fun part is Toyota seems to have denied being pressured by Apple to make this move. Toyota has described its campaign as an “interesting experiment” that helped it reach a new set of audience. Did Apple really pressure Toyota? This starts to sound like one of those Geico ads.

Apple has been going after the jailbreak community for a while. But jailbreakers have stayed one step ahead of the company for now. Apple may have not aimed for the kill with these folks, but it is not going to help promote this type of activity either. The jailbreak community is expected to continue its growth in the future though.