Every year that goes by, more people get comfortable with the idea of jailbreaking their iOS devices. Apple has built a wonderful platform but some of the restrictions it has encourage people to hack their device. iOS 6.1 jailbreak is finally here. The Evad3rs team finally released an untethered jailbreak that works on the latest generation iOS devices, including the iPhone 5.  The jailbreak has been so popular that thousands of people have downloaded it already.

The process is quite simple. As the above video shows, you need to download the evasi0n jailbreak tool to get started. The solution works on OS X, Windows, and Linux computers. This work fine on iOS 6 devices too. Demand for this jailbreak solution has been so high that Evad3r’s servers were pushed to the limit. Apple will try its best to stop jailbreaking with new iOS updates. It will be interesting to know how many folks will jailbreak their device till then.

Apple is working on new products and services all the time. We have known for some time that it may be working on a music streaming service. With the emergence of the latest jailbreak for iOS, some have been able to find hidden radio buttons on their devices. Considering that the buttons include the word “buy” in their file-name, it is not too hard to imagine what Apple might have in store for us. 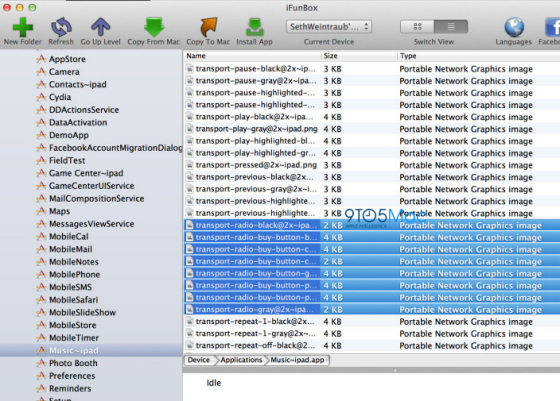 Apple competing with Pandora and Spotify is not that strange. While these hidden buttons show up on jailbroken iPads, it is not clear when Apple will release its new music service. According to Bloomberg, such a service could launch as early as Q1 of 2013. We will have to wait and see.