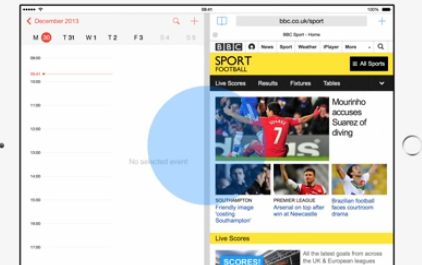 Apple is going to release new iOS devices later this year. It is also going to introduce iOS 8. Needless to say, there are going to be many exciting changes ahead for iOS fans. The latest rumor suggests that Apple may introduce a new split-screen multitasking feature for the iPad. We have seen jailbreaks that more or less accomplish the same thing. But Apple now wants to let iPad users access and use two apps at at the same time.

Microsoft Surface tablets may not be as exciting as iPad, but they do offer users the chance to snap multiple apps onto their screen for multitasking. Microsoft has been boasting about that feature in its ads. As 9to5Mac is reporting, new iPads will offer similar multitasking. In fact, users will be able to track content from one app to another and get things done faster. Let’s hope at least some of these reports turn out to be true.

Speaking of iOS 8, Apple could introduce support for high definition audio playback in its next iOS release. Mac Otakara is reporting that new versions of In-Ear Headphones and Lightning connector are in the works too. The current iOS 7’s Music app can’t play 24-bit audio files with a sampling frequency beyond 48 kHz. By offering an upgraded Lightning cable, users will be able to experience high definition playback on MFi audio accessories. Apple will introduce iOS 8 at WWDC 2014.