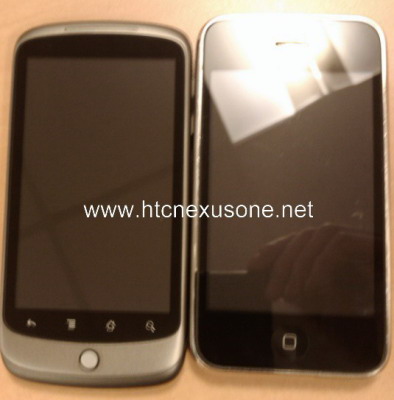 Google is serious about challenging the iPhone’s momentum in the smart phone market. The company has already built a decent platform in Android, which is not only growing fast, but it’s expected to catch the iPhone platform in popularity by 2012. Of course, only the naive thought that Google was going to sit out and watch others manufacture handsets for Android. Nexus One, which has generated a lot of buzz since it was announced, is expected to outdroid the Droid itself.

Droid got a lot of press from overzealous bloggers who crowned as being “better than the iPhone.” The device is certainly capable, but it’s by no means an iPhone killer. Google clearly is looking to build an iPhone killer, and Nexus One is expected to be another step in that direction. The leaked pictures of Nexus One certainly show there may be some hope for the device. The device doesn’t look terrible, and it’s actually more compact than the iPhone (but has a larger screen). Logically, it’s impossible to know what this device is capable of unless with have its specifications in hand, so it’s too early to crown it as the next iPhone (see a video demonstration after the break).

According to many industry sources, Apple iPhone is still the most popular handset on the market. So Google has ways to go to get Nexus One to a position that it can challenge the iPhone. But Google never enters a market to be second, so it’d be interesting to see what other surprises Google has for us in 2010.

iPhone also has room for improvement. For starters, Apple should finally bring more carriers on board to help take iPhone to the next level. With AT&T not improving its quality of service and thinking of innovative ways to make more money from its customers, a partnership with a decent carrier could go a long way towards keeping iPhone at the top. Let’s just hope Nexus One is not another over-hyped phone, so we can see it go head to head with the iPhone. When smartphone companies compete, we consumers win.