In case you missed it, Apple has now delivered over 25b iOS app downloads. That is a staggering # of downloads and shows why iOS is going to be a dominant force in the mobile OS market for the foreseeable future. Apple announced the apps that topped its all-time charts already. Not surprisingly, Angry Birds is the most popular paid iPhone app of all time. Fruit Ninja, Doodle Jump, and Cut the Rope also made it to the top 5 list. 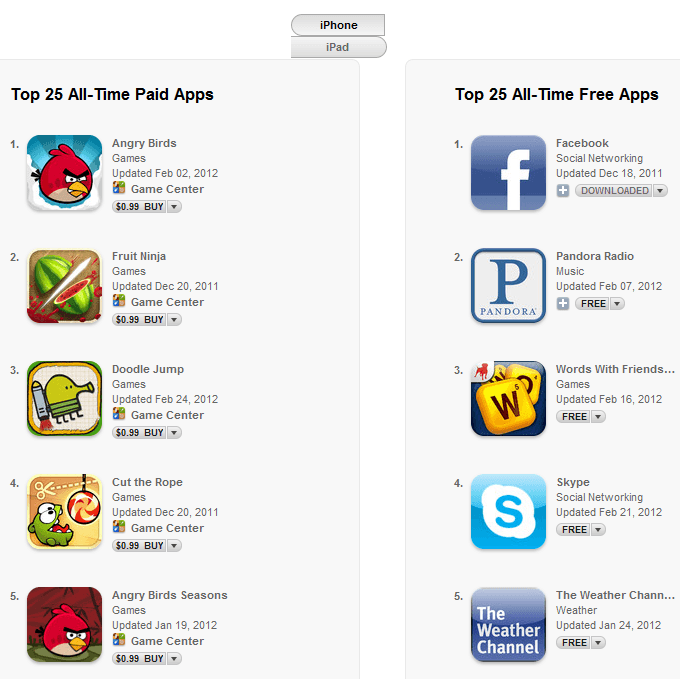 These results show how popular the Angry Birds franchise has become. It had 3 out of the top ten paid app slots for iPhone and iPad. Facebook was unsurprisingly the #1 among free apps with Pandora, Words with Friends, and Skype following. Mac Stories did an analysis of these charts and came up with these important conclusions:

Speaking of apps, the Futulele by Amidio is an app you do not want to miss if you would like to turn your iPhone or iPad into a Ukulele. Users can play the app on its own. But there is a guitar-shaped case included with it that holds both your iPhone and iPad. Once inside the case, the iPhone is used for holding the chords while the iPad can be used from strumming the strings.

You can use up to 12 chords for each song and change chord sets on the fly. Overall, the Futulele sounds like fun. There is no word on when this musical instrument kit will be available.