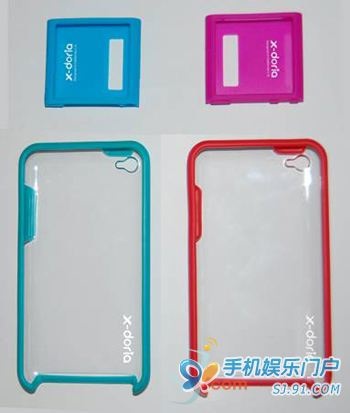 We are only days away from Apple’s planned event on September 1st. For months, we have known that new iPod Touch models would be getting video-recording capability. The next generation iPod Touch will have a front-facing camera too. Many experts expected Apple to introduce iTV at this event, but the change in date (from Sep 7th to 1st) seems a bit curious at this point. We still expect to hear some news about Apple TV at this event, but fans may have to wait a bit longer to get their hands on these devices.

Apple iPod Touch is not the only device that will be getting an upgrade. The camera and the rumored new shiny design for iPod Touch are nice, but Apple has not forgotten about iPod nano fans. As the above picture indicates, Apple may be going back to square-shaped iPod design after all.

The nano 6G case features an open strip on the rear – perhaps for a camera or built-in clip – as well as what appear to be volume buttons and a larger button on the top side while a Dock Connector and headphone port are along the bottom.

Apple iTunes may get a major overhaul in the near future too. The software has gone though many updates in the past few years. It seems Apple may finally be ready to bring a web-based iTunes to the market. It will be more about a social (and not streaming) experience. Nevertheless, it’s an exciting move by Apple (if the rumors are true).

music sources tell me they’re expecting a lightweight, Web-based version of the iTunes store. The new version would be designed to sync up easily with the rest o the Internet and make it much easier for customers to share their musical tastes (but not songs) with friends.

Apple may not have everything in order to allow streaming music from the cloud, but this web-based iTunes should still work for those of you who just want to purchase music or share your favorite songs with your contacts. Then, there is this:

In theory, Apple could make it possible for you to move a copy of a song you bought on your iPhone onto your laptop without having to manually connect the two devices.

Apple has been planning for this move for quite some time. There is no better time to get started with this move than now.

Jailbreakers Getting Frustrated with Apple?

Regardless of how one feels about jailbreaking and those behind it, there is no question that iPhone Dev Team has...