It was only a short while ago that Google announced it was activating 500k Android devices everyday. These types of stats can be quite deceiving if taken out of context. As multiple studies have shown, Android is growing at a slower date at this time. Nielsen’s May survey of mobile consumers in the U.S. shows 38% of those surveyed own a smartphone (chart courtesy of Nielsen). 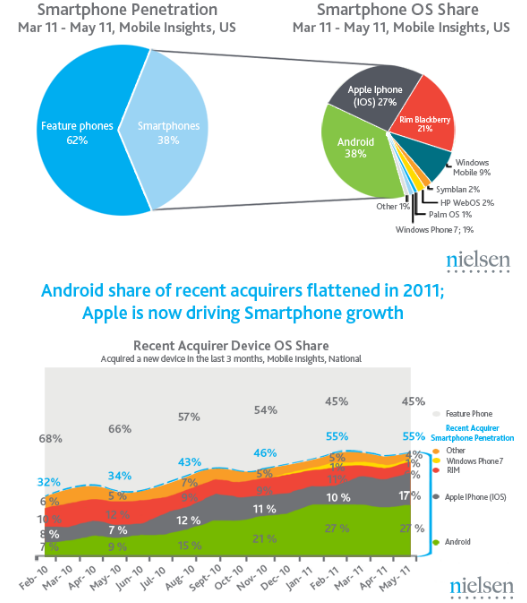 Android is still the most popular mobile OS at this point. With 38% of mobile consumers owning an Android device, Google has a lot to brag about. The platform has not grown as fast as it used to though. In fact, Nielsen’s recent study shows that Apple is now the main growth driver in the smart-business (for now anyway).

Apple is expected to continue its steady growth for the time being. With a new iPhone coming later this year, Apple has a lot going for it. iPad 2 may have not been a revolutionary upgrade over its predecessor, but there are not many tablets that can be called a worthy rival for it. HP TouchPad is certainly not the iPad killer many thought it could be:

Apple won’t always have the best products in the markets it is involved in. Still, it will take a special effort to outperform Apple in the smartphone and tablet markets. Things can change quickly in these markets though.