A year ago, it seemed as though iPhone owners would have to wait a few years for Apple to strike a deal with carriers other than AT&T. Verizon and Apple were far away at the time. Fast forward a few month, and Verizon iPhone is a virtual lock to be released in early 2011. According to Verizon, this did not develop out of the blue. Verizon claims that its decision to move to LTE has attracted Apple:

If the iPhone comes to us, it’s because Apple thinks it’s time. Our interests are beginning to come together more but they have to take steps to align their technology with ours,

said Verizon CEO Ivan Seidenberg. Many experts have had questions about Verizon’s potential ability to handle the load that devices such as iPhone will put on its network. Verizon sounds confident that its 4G network will handle a ton of load. While Verizon’s 4G network will offer better speed and QoS to customers, smart-phone shoppers may find it hard to sign up for unlimited plans in the future.

We need to get into it, figure out what the customer thinks is fair, and go from there

We have heard a lot of rumors about Verizon iPhone but we have not exactly gotten any confirmations from Verizon or Apple about its specifications. This leaked picture of Verizon iPhone does answer a few of our questions (if it is indeed genuine): 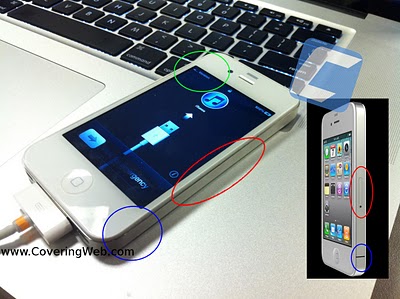 While the image does look a bit fake, its features do seem to match up with what we have heard about Verizon iPhone. Verizon iPhone is expected to have a new antenna design. Since Apple has not released white iPhones to the market, many are speculating that those will be exclusive to Verizon. We would be willing to consider this picture as genuine if a video demonstration was included next to it. For now, it’s all speculation.