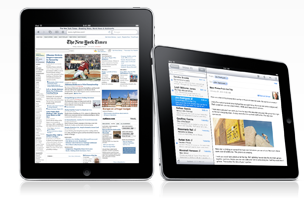 Apple may have announced the iPad last week, but that hasn’t stopped people from talking about all the rumors that surprisingly refuse to die down. Before the iPad was released, many experts expected Apple to introduce multiple tablets to reach out to more market segments. As it turned out, Apple decided to stay with one device and introduce different flavors of it instead. But could Apple be secretly working on a new tablet even before the iPad is shipped?

When you think about it, the iPad is more iPhone like whereas many expected it to be closer to Macbooks. So it’s not out of the realm of possibility for Apple to introduce a tablet that is capable of replacing your laptop. According to TechCrunch, this new tablet could be much larger in size as well. We all know that Apple is a big fan of touch computing. The iPhone has proved that touch-screen devices can be quite popular. So it’s not a surprise if Apple iPad is not the last of Apple’s tablets.

While I don’t put it past Apple to introduce a new tablet in a few weeks, I doubt the company will take that step. With iPhone 4 coming up and iPad just launching, I doubt Apple would risk consumer confusion by introducing even more products left and right. Besides, Apple is likely to face many lawsuits over the iPad, so the company is going to have a lot on its hands.

It’d be nice if Apple introduced a Macbook tablet hybrid. We have already seen these devices in the laptop PC market, but the market for these devices is not to large. Apple will introduce new tablets, and they will be much more powerful than iPad. But these latest rumors about another tablet being in the works seem highly unlikely to say the least. We will have to wait and see in a few months.