We have known for some time that Apple intends to improve its App Store to make it easier for developers and app shoppers to connect with one another. A new Apple patent discovered by Patently Apple hints at an ingenious App sharing plan by Apple that would allow iOS users to lend or recommend App Store items to others. Apps can be shared for a limited time (or with limited features) with others. Those who share applications can receive incentives if developers choose to reward them. 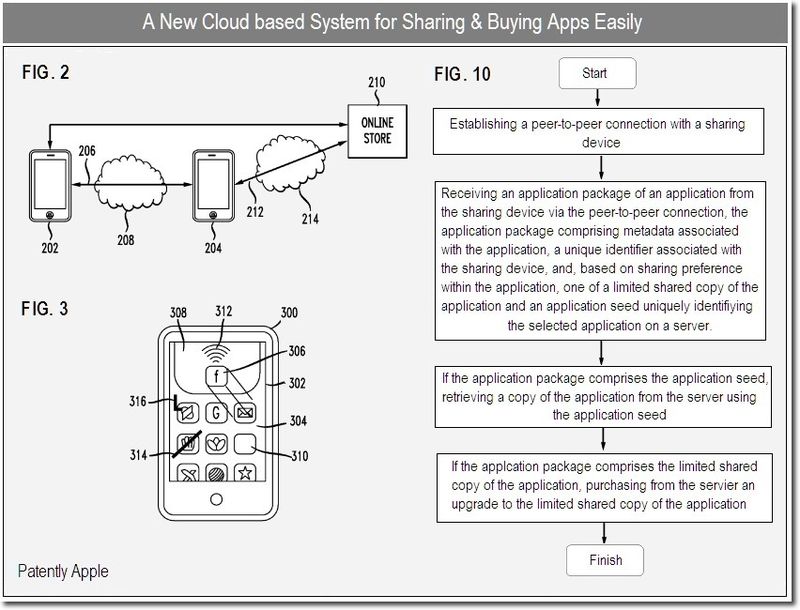 Let’s say you are interested in recommending an application to a friend or colleague. Thanks to the above mentioned technology, you could push your app to your friend’s iOS device. Developers can define how long or how many times an application can be shared. Not surprisingly, Apple wants to allow app owners to share their apps with the others as conveniently as possible (to hopefully encourage them to purchase those apps):

Aaron wishes to share an application from his smart phone with Brent’s smart phone. In this example, both Aaron’s and Brent’s devices are smart phones. But in implementation, one device can be a smart phone and another can be a personal computer, for example. In another implementation, a fixed-location sharing device is incorporated into a wireless access point in a cafe so cafe customers can share applications from their mobile devices to the wireless access point which in turn can share the application with future customers after the original mobile device leaves. A peer to peer network can include a homogeneous and/or heterogeneous mixture of devices.

It seems Apple is taking a page from B&N’s Nook playbook here. B&N was able to differentiate its e-reader from Amazon Kindle early on by allowing e-book shoppers to lend their books to others. Apps may be different from e-books in nature, but there is no reason one should not be able to lend them to others (and get a reward for referring apps to friends). This way top apps can sell themselves with the help of app shoppers. When this technology will be implemented is not known at this point.

How would you improve Apple’s app lending idea?