Apple iOS is one of the most popular mobile OS platforms around these days. It runs on millions of Apple handsets and tablets and gets a lot of love from developers too. The platform has provided many developers with another channel to make money from coding. According to new numbers published by Flurry, iOS is gaining in developer support while Android is not growing as fast as it used to. 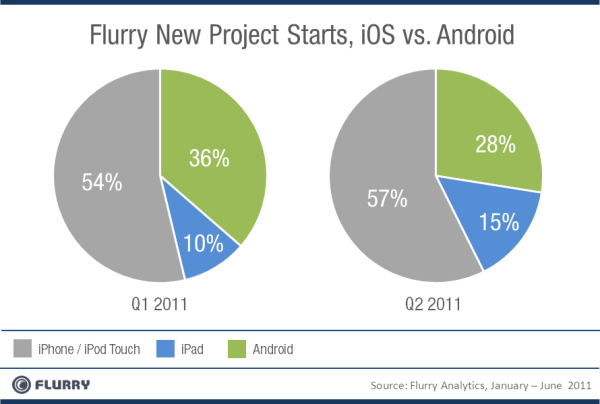 iPhone/iPod new project starts have risen from 54% in Q1 to 57% in Q2. iPad apps are on the rise as well. Android had been rising in Flurry’s numbers consistently in the past. It is very  early to read too much into these numbers. The launch of Verizon iPhone and iPad 2 may have played a role here. With iPhone 5 coming soon, even more developers will focus on OS.

The majority of apps bought by iPhone and iPad owners are games. Apple is very much serious about dominating the mobile game market. The fact that developers are still excited about iOS has boosted Apple’s efforts.

We are 12 to 24 months away from being able to disrupt the living room with experiences that you might be playing on an iPad version four, but projecting … to a TV in your living room,

claims mobile-game publisher Neil Young. iOS games have been getting consistently better in the past couple of years. As Gartner has predicted, spending on mobile gaming software may reach as high as 20% of the game software industry. Nintendo and other console makers are not too excited about mobile games. But they are most likely in the wrong side of history.