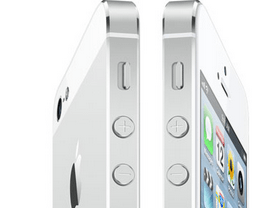 The iPhone 5S is going to be here soon enough. Some blogs have reported that it may be delayed but Apple has not confirmed those rumors yet. The new iPhone is expected to have an even more elegant design with more powerful hardware inside. Brian White of Topeka Capital Markets is now suggesting that the iPhone 5S will be getting a fingerprint scanner. As other sources have indicated, the device will have a faster processor and could be offered in multiple sizes.

The relationship between Apple and Foxconn is no secret. The news that the company has added about 10k assembly-line workers per week in Zhengzhou does suggest that iPhone will start getting mass-produced soon. Apple is rumored to be exploring the idea of introducing a cheaper iPhone this year. It is not clear when that will be launched.

Speaking of the new iPhone, most experts expect it to have a new design. How aggressive Apple will be in that regard is anybody’s guess. Designer Ran Avni has produced an elegant concept that explores what Apple could have in store for all of us this year. The concept includes a 4.5-inch Retina display but does not have Home Button.

While the above concept is elegant, Apple will likely keep the Home Button for now. We will know more when iOS 7 is released.