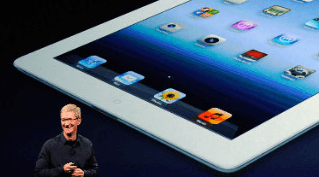 Apple finally announced its latest generation tablet yesterday. It won’t be named “iPad 3” or “iPad HD.” As it turns out, Apple may be ready to stop using numbers to name its tablets. The new iPad is called “the new iPad” at this point. This is not a mistake. An Apple spokesman has confirmed that this new device is “just iPad.” The new naming convention is not completely new. Apple did use a similar approach for iPods.

This is going to cause some confusion among Apple customers. There is always a chance that the old naming convention makes a comeback if the new name does not connect well with customers. During yesterdays’ presentation, Apple executives kept talking about the role the iPad is playing in the post-PC world. Apple does not use numbers to name its MacBooks and iMacs. Why should it have one for its iPads?

Speaking of the new iPad, Sprint won’t be getting it this time around. The carrier has gotten the iPhone but Sprint fans will have to wait to get their hands on  Sprint 4G iPads. Multiple sources have suggested that the issue was timing for Apple. Sprint is in the process of rolling out its 4G LTE network in 10 cities. Apple allegedly needed a bigger roll out.

It will be interesting to see if Sprint gets the LTE iPhone when it hits the market. It is now almost certain that the next iPhone (whatever it is called) will be a 4G device. Will Sprint’s network be ready by the time “the new iPhone” shows up? We will have to wait and see.