In a move that could remind us of the stone age, Apple had decided to put one over Google by banning the term “Android” in its app store. Flash Of Genius is a small startup that has been developing training & educational apps for Android and iPhone. The company has had a lot of success on Android and was a finalist in Google Android’s Developers Challenge. That’s a great accomplishment for a developer anyway you look at it. So it’s no surprise that the developers at Flash Of Genius decided to include their accomplishment in their iPhone app description. As it turns out, Apple doesn’t like the word Android too much. 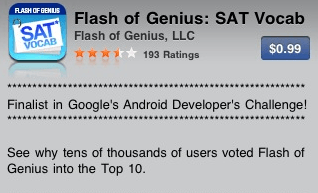 The above pictures is how the app would have looked like had Apple accepted it as it were. But one should be a very optimistic person to expect Apple to allow such a blasphemy in its app store. After all, all the people who visit this page will become Android fans, right? Now if I were Apple, I would try to be a bit more vague about it. But Apple doesn’t pull any punches:

Providing future platform compatibility plans or other general platform references are not relevant in the context of the iPhone App Store.  While your application has not been rejected, it would be appropriate  to remove “Finalist in Google’s Android Developer’s Challenge!”  from the Application Description

I can’t say I am surprised with Apple’s latest move. Apple and Google are not on the best of terms. Google is not making things easier for Apple by introducing its own phone and planning its own tablet. Banning the term “Android” is a bit too much as far as I am concerned. Maybe Apple feels a bit insecure after all. Or maybe the company is only putting salt on Google’s wounds, especially after the dismal numbers Google Nexus One is pulling.

The competition between Apple and Google can get even nastier. Android is expected to be a big threat to iPhone in the upcoming years. So don’t expect Apple to pull any punches or behave in any manner. We may not like the way Apple behaves and controls everything, but at least the company tells you what it doesn’t like to see. That’s better than nothing.

Your take: would you cave in if Apple asked you to do the same thing as Flash of Genius?