Over the past few years, Apple has managed to gain a lot of momentum in the stock market with its innovative products such as iPhone and iPad. No matter how large a company, when it loses $10b in marketcap in a matter of minutes, it raises eyebrows. Flash crashes have happened in the past. This time around, it is Apple that is a victim. 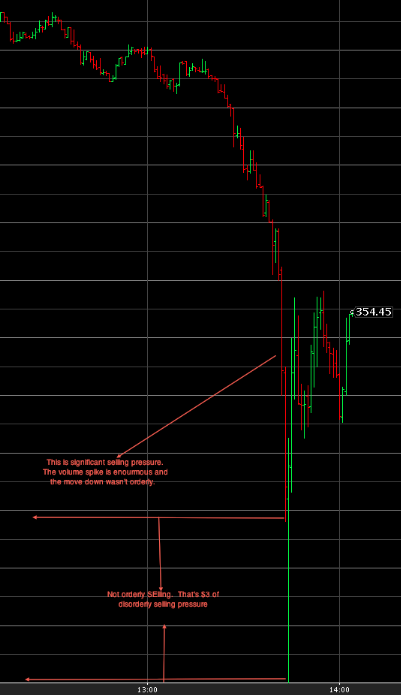 We are no stock market experts, but apparently this type of crash is not normal, especially considering that Apple is not dealing with a new disaster (at least not one that we know of yet). There were rumors that Steve Jobs may have returned to hospital. But that rumor is not true and could not be behind this strange crash:

The selling is not normal just for negative news… There was a huge spike where dollars were being skipped in the selling. I saw Apple tick from $351.70 to $349.00 within seconds.  There’s something else.  The selling was not normal.  That’s for sure.  It wasn’t orderly. Take a look for yourself.

said Bullish Cross‘ Andy Zaky. According to multiple sources, Steve Jobs has remains involved at Apple, taking business meetings at home and on the phone. So are we dealing with a computer glitch? That is not clear at this point.

Apple’s shares may have crashed. But that does not mean the company is in trouble. In fact, it may already be looking for a way to expand the iPhone family. A report published by Bloomberg suggests that Apple is working towards releasing an iPhone nano.  This phone is expected to be cheaper and give Apple more flexibility going after Android phones.

Apple is also working on dual mode phones. The company does plan to take advantage of a universal SIM card to expand its market-share faster, globally. With all the new products Apple is working on, it would be disturbing if flash crashes happened more often for the company.

Are you excited about iPhone nano?