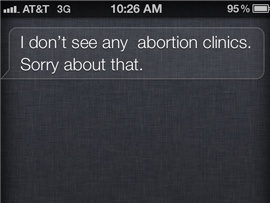 The issue of abortion has been quite polarizing in this country. Some people want to ban the practice altogether. Then there are some who believe in women having a choice in the matter. We have seen plenty of funny answers come out of Siri. But Siri seems not that helpful when it comes to finding abortion clinics. Apple CEO, Tim Cook, has already explained that Siri results are not perfect and this is all a big misunderstanding.

These are not intentional omissions meant to offend anyone. It simply means that as we bring Siri from beta to a final product, we find places where we can do better, and we will in the coming weeks,

Apple spokeswoman Natalie Kerris told the Times. This seems almost identical to the response Tim Cook provided to Nancy Keenan. Unfortunately for Apple, not everyone is buying the explanation. Some iPhone users are outraged that Siri is well capable of finding Viagra but does not cover abortion clinics.

To claim that Apple is trying to be sexist with Siri is simply ludicrous. It is a shame that Siri is not perfect and can’t find every business under the sun. Siri has the potential to be a game changer for Apple as the company contemplates adding it to its upcoming HDTV and iPad products. Perhaps the data sources used for Siri need some work. It is extremely doubtful that Apple has designed Siri to hide data on abortion clinics. Apple did drop the ball but this issue can be fixed easily.

What’s your take on this? Are people blowing this out of proportion?