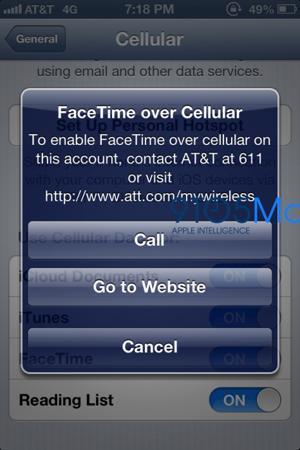 A short while ago, there were rumors going around that AT&T might consider charging for FaceTime. It seems that won’t be the case. As long as you have one of its new Mobile Share data plans, you won’t be paying for now. These new plans will launch August 23rd, allowing users to share their monthly data allotment across multiple devices. Each of these plans will have a monthly cost for data usage and a per device charge. AT&T had this to say about its plans for FaceTime:

AT&T will offer FaceTime over Cellular as an added benefit of our new Mobile Share data plans, which were created to meet customers’ growing data needs at a great value. With Mobile Share, the more data you use, the more you save. FaceTime will continue to be available over Wi-Fi for all our customers.

Sprint is another carrier that won’t be charging for FaceTime over cellular (Verizon’s plans are not known). This is an expected move by AT&T to get more people to sign up for its new plans at this point.

In the past few months, we have heard a lot about the ongoing patent lawsuits involving Apple and Samsung. Both companies have been trying hard to gain the upper-hand. Google has now joined the battle by going after Apple with Motorola Mobility’s portfolio of technology patents. The firm has filed a complaint with the ITC claiming that Apple is infringing on seven of its patents. Siri is part of the complaint as well.

For its part, Apple has tried to get Motorola back with its own lawsuits in the past but failed to do so. If the courts do rule against Apple, the iPhone could be temporarily banned. It will be very interesting to see how this turns out.