This year is going to be a very important one for Apple. The company is expected to release new iPhones, iPods, and iPads. It might even introduce a couple of brand new products (e.g. the iWatch). Apple will also be introducing the next major iOS release soon. Details are a bit sketchy on that but iOS 7 is expected to be a major upgrade over the current version.

Apple is going to take its time before releasing iOS 7 to the masses. But that is not stopping creative fans from coming up with their own ideas. The one shown in the above video clearly borrows a few design ideas from Google. The design looks clean and elegant. It remains to be seen whether iOS 7 will look close to this. 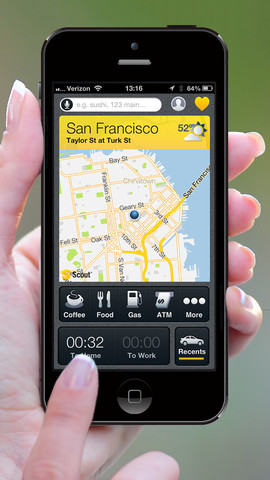 We have been maintaining a list of top iPhone GPS applications here for a couple of years now. There are plenty of exciting free and paid apps available for those of you who would like to use your phone to find your way around. Scout is a beautiful tool that provides you with personalized GPS navigation. You get traffic information and other useful information as Scout learns from your friends and recent places you have visited.

Scout looks elegant and can be controlled using voice. Some users have complained about its reliability but the idea has potential.