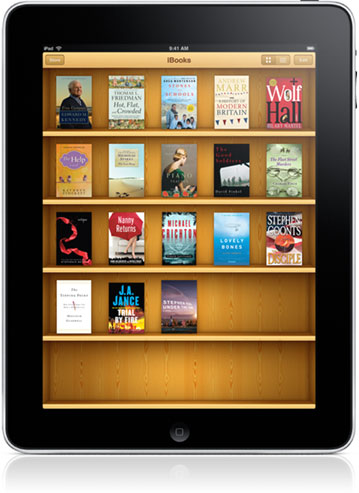 Kindle and Nook may be dominating the e-book reader market, but the companies behind them (Amazon and B&N) realize the potential that the iPad has. The iPad is not just an e-book reader. Developing one trick pony devices is not something Apple is interested in. The iPad is going to be a major challenge for Amazon and B&N to deal with. Both companies have invested a lot in their hardware, and while the iPad does not take advantage of E-ink technology, it does offer its users many features that Kindle and Nook are not capable of matching. There have been talks about Amazon and B&N planning to imitate Apple iPad’s best features to keep themselves in the game. But both companies are not going to let Apple to take a chuck of their e-book business without a fight. That’s why they are working hard to bring their apps to iPad on day one.

According to NY Times, both companies have assembled an iPad team to bring their e-reader apps to iPad as fast as possible. The fact that neither company received a test unit does not seem to have stopped them in their tracks:

Amazon.com and Barnes & Noble are working on apps for buying and reading electronic books, even though both companies sell their own e-reading devices and Apple will offer its own iBooks app. The expectation is that the iPad will give a big lift to the e-book market, benefiting the whole industry. Neither company was given an iPad for testing.

As far as Apple is concerned, adding Kindle and Nook platforms to its device is a win win for now. The move gives the iPad the most comprehensive content bank on the market. Besides, those who own a Nook or Kindle will have an easier time switching to the iPad instead of holding out for the next edition of their e-reader.

The iPad is already putting pressure on hardware manufacturers in the e-book reader market. It’s not clear how Plastic Logic will deal with this move, but Sony is hoping to combat the iPad effect by lowering its e-readers’ prices. Amazon for its part understands that it can’t stop the iPad by trying to create an iPad clone. At the end of the day, the company makes a lot of money from selling e-books. Coming up with the best price structure for e-books can give the company a chance. Considering that Apple is also interested in securing the lowest e-book prices for iPad, the e-book wars seem to have just started.

Amazon and Sony have had a lot of chances to innovate and take their e-book business to the next level. But both companies seem to have blown a big opportunity to solidify their positions in this market. With iPad making its debut in a matter of days, the future is not clear for these companies. It’d be interesting to see how smaller players in the e-book reader market cope with the emergence of the iPad.