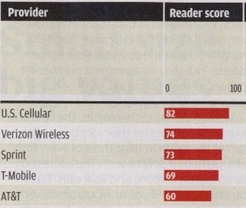 Many iPhone owners have been complaining about the quality of service that AT&T has been offering them. AT&T’s network was simply not ready to handle Apple iPhone. That lead to slowness, dropped calls, and all kinds of other issues. In the age of Internet, no company can get away with that. According to a survey by Consumer Reports, AT&T is the worst wireless carrier, by a healthy margin. Participants were asked about overall value, voice, data and texting services, and customer service offered by their carrier. Here are the total scores:

You will need a paid Consumers Report account to view the breakdown. Let’s just say AT&T did not fare very well in most areas. In fact, had it not been for its score in texting, AT&T would have gotten a clean sweep of black circles (they stand for worst in each category).

As BGR reported, AT&T takes this report very seriously. It is not clear how they can fix all these issues soon:

We take this seriously and we continually look for new ways to improve the customer experience. The fact is wireless customers have choices and a record number of them chose AT&T in the third quarter, significantly more than our competitors. Hard data from independent drive tests confirms AT&T has the nation’s fastest mobile broadband network with our nearest competitor 20 percent slower on average nationwide and our largest competitor 60 percent slower on average nationwide.  And, our dropped call rate is within 1/10 of a percent – the equivalent of just one call in a thousand – of the industry leader.

Consumer Reports has given iPhone 4 a hard time in the past as well. But iPhone scored the highest in CR’s smart-phones ratings. AT&T had no such luck. Considering that Verizon iPhone is only a short while away, AT&T should expect to lose a significant number of its customers to Verizon. Verizon is so excited about iPhone, it does not want to share it with T-Mobile or Sprint:

We are hearing that [Verizon] does not want iPhone, the hottest selling smartphone, available on T-Mobile USA and/or Sprint and may be willing to pay for exclusivity to itself and AT&T… Apple is back in the driver’s seat with a record 14.1 million iPhone shipments in the September quarter helping AT&T gain share against [Verizon] over the last two quarters as Android starts to lose some of its luster,

explained Shaw Wu, an analyst with Kaufman Bros. Can Verizon handle iPhone better than AT&T? It has had the time to plan for it extensively. Let’s see if the company lives up to its reputation.