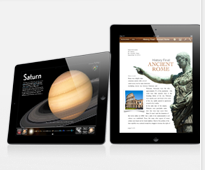 The upcoming year is going to be a huge one for Apple. The company is expected to bring iPad 3, iPhone 5, and a new Apple TV to the market. The iOS 5.1 beta software which has been released by Apple recently suggests that could be very much the case. As 9 to 5 Mac has reported, the code refers to (iPad 2,4) and (iPad 3,3). The first one is going to be a new flavor of the current generation iPad (perhaps a WiMax one). The latter points to an iPad 3 being in the works.

The next generation Apple TV codename is J33. To be fair, we don’t know whether this new Apple TV will be drastically different than the current one. It very well may not be the real iTV that some Apple fans have been waiting for. The code also suggests a new iPhone will be released next year (iPhone 5.1).

Most experts do expect Apple to bring major changes to its iPad product-line in 2012. The tablet market is heating up with ASUS and other Android partners bringing their quad-core tablets to the market (ASUS Eee Transformer Prime has recently gone up for pre-order). Analyst Ben A. Reitzes with Barclays Capital suggests that Apple could bring a faster iPad 2 as well the iPad 3 to the market in 2012.

The iPad 3 is rumored to have a much better display, a quad core processor, and full Siri integration. Apple could keep iPad 2 around and drop its price to reach even more homes. The next generation Apple tablet will have IGZO technology on-board. That means it could be potentially thinner and more energy efficient.