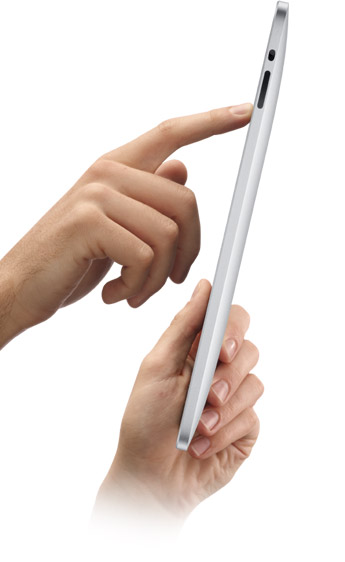 Apple has had a huge amount of success with the first generation iPad. Its launch has gone without a major problem, and people have been buying iPads like hotcakes. Of course, Apple would not be as successful as it has been if it didn’t come up with new products/improvements on a consistent basis. Apparently, Apple has already started planning out iPad 2. According to Digitimes, Apple is working to add smaller, OLED screen iPads to the iPad family.

Apple has recently placed new iPad orders to Taiwan-based component makers for the fourth quarter of 2010 and the first quarter of 2011 with 9.7-inch, 5.6-inch and 7-inch models all included.

The current iPad is fully capable of acting as a mobile entertainment center or an e-book reader. But more portable and compact iPad models would not hurt. The same rumor also points to Apple using OLED displays on new iPads. Considering that OLED screens are still somewhat expensive for Apple to integrate into iPad, we can’t put too much weight on this rumor.

Apple iPad’s current screen cost the company about $70 whereas an OLED screen of the same size can go for as high as $500. The gap is simply too large for Apple to adopt OLED displays for iPad 2 (without a major price hike). T3 claims that Apple may improve iPad’s graphic capabilities significantly, so the e-book and gaming markets seem to be at the top of Apple’s priorities.

Let’s hope that Apple resolves those small syncing problems by the time the next iPad is released. The latest iOS release is expected to improve some of the networking issues that iPad owners have experienced. Thankfully, Apple iPad does not have a major design flaw.